Scale Up vs. Scale Out Architecture: How Should You Scale Your Storage System?

Scalability is a must-have for any IT environment. This is especially the case where storage architecture is concerned. Between all the documents, PDF files, photos, and videos, the average firm has more unstructured data than it knows what to do with. Clearly the importance of scaling up to meet increasing storage demands can’t be debated. What can and has been argued to great length is how to go about it. Should we scale up, or scale out storage architecture? This article will answer the question by explaining the difference between scale out and scale up.

Scale Up vs. Scale Out: The Ups and Downs of Scaling Up

Also known as vertical scaling, scaling up is the process of adding to existing hardware. So instead of buying new equipment, you bolster your main server by installing additional RAM, processors, and disks. There are unique and compelling advantages to this scale up architecture approach, including:

Scaling up is how the enterprise has handled storage upgrades for decades. But like cheesy stock photos to web design, this old school approach has slowly lost its effectiveness. The RAM, CPU, and hard drives added to a server can only perform to the level the computing housing unit allows. As a result, performance and capacity become a problem as the unit nears its physical limitations. This in turn impacts backup and recovery times, and other mission-critical processes.

The scale up concept is even more of a hassle when you need fork-lift upgrades. These are replacements and additions that call for heavy lifting. In many cases you’re forced to copy every piece of data from the old server over to a new machine. This can be costly in terms of both spending and downtime. In addition, adding another server to the mix usually means adding yet another data store. This could easily result in a chaotic situation where the network is bogged down with storage pools and users don’t know where to look for files, both of which are major threats to productivity.

Scale Up vs. Scale Out: Scaling Out to a Better Way

Also known as horizontal scaling, scaling out architecture is the process of replacing or adding new hardware to existing IT systems. By nature, this method is designed to offset many of the disadvantages that plague scaling up. Core advantages of scale out storage architecture infrastructures include:

The beauty of the scale out methodology lies in its on-demand flexibility. Organizations can start out with an investment that supports their existing environment and allows for reasonable growth. Then as business evolves and their storage needs grow, they can incorporate additional capacity – all without tedious forklift upgrades. While scale out storage infrastructures are usually more expensive to deploy upfront, their hassle-free approach to scalability often leads to a more cost effective investment in the end.

Scale Up vs. Scale Out: The NAS Effect

Network attached storage makes it possible to share legions of files across multiple servers using a simple Internet connection. For years it was the defacto standard for advanced enterprise storage needs. Try as they may, even makers of high-capacity NAS devices in the petabyte range struggled to keep pace as their enterprise customers continued to accumulate more and more files. Those same customers were then forced to buy additional NAS units, and all the file systems, namespaces, and connectivity points that come with them. Taming this wild beast can be a nightmare of a time for IT departments.

Coupling the scale-out architecture with NAS is among the latest trends in storage and an important one at that. Storage pools can now be streamlined without consuming excess resources. Unlike traditional scale up infrastructures, upgrades take place in quick and painless fashion. The environment is tailor-made for companies that need capacity and performance to accommodate the massive amounts unstructured data they have sprawled across their distributed networks.

Scale Up vs. Scale Out: Scale Out at Work

Scale out storage may sound too good to be true for IT pros who’ve been raised on the scale up approach. Of course it doesn’t all just magically come together. There’s a method to the madness, so I’d like to delve into how the scale out concept works for those interested in the technical aspects. 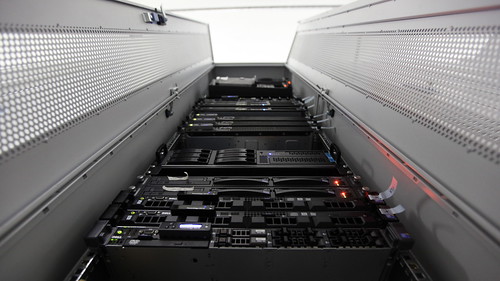 The ideal scale out infrastructure combines two popular IT concepts: server clustering and software-defined networking. Software companies develop applications that once installed, allow your infrastructure to expand seamlessly by adding new clusters and storage devices as needed. Leveraging basic network protocol, these devices combine to function as a single unified storage system. This is capable of sharing CPU, RAM, and other resources between one another. Individual clusters can be managed via a distributed file system or global namespace, essentially making the physical location of your servers a non-issue.

A scale out NAS architecture can support a single cluster, or multiple clusters with virtually unlimited capacity. Each new device comes bundled with its own set of resources to help optimize the total efficiency of your storage system. For example, a new server may include additional storage space as well as its own CPUs, RAM, and I/O. As a result, scale out systems not only increase storage capacity, but improve performance and overall reliability.

Scale Up vs. Scale Out: Scale Out Concerns

Every system has its flaws and the incredibly flexible scale out architecture is no exception. Perhaps the biggest concern to keep in mind is that adding new storage devices means you are essentially adding potential points of failure that wouldn’t exist in a scale up environment. Storage technologies have evolved to a point where systems can automatically expand to accommodate growth. But many backup systems still require manual tweaking each time new devices are added to the network. With statistics showing data growing at an explosive rate, the chance that a bottleneck situation could foil your backup plans is a very scary reality.

Maintaining and adding new functionality to your storage system is another area of concern. While scale out upgrades are generally a breeze, updates are a different story. Rolling out software updates to hundreds of nodes can be complicated, especially for organizations that write their own applications. Perhaps the most logical way to address these concerns is to simply take a selective approach to scaling out your storage network. What I mean by that is try to avoid incorporating any number of devices that exceeds your capacity or performance needs. Easier said than done perhaps, but doing so will help keep both costs and complexity to a minimum.

Scale Up vs. Scale Out: The Last Word

Some pundits will lead you to believe that scale up infrastructures are outdated. That isn’t entirely true. If you’ve yet to outgrow your current system and it still has plenty to give, scaling up probably makes the most sense. And though scaling out has a much bigger upside, it’s imperative to understand that it is not without risks. At the end of the day, taking your budget, IT team, and immediate storage needs into consideration will point you towards the right decision in deciding on a scale up vs. scale out architecture.